Our auditors certainly know how to get around!

Firstly, congratulations to our trainee IFQP auditor Darren Brown who successfully passed his IFQP practical in Miami, USA last week, this comes after completing his initial IFQP training in Bogota, Columbia at the end of last year!

Also, Justin our fully qualified IFQP auditor has had his fair share of country hopping this month to complete 3 independent fuel audits for Wizz Air (Hungary) Ltd to assist them with their IOSA registration.

It was then back to the UK for a few days to catch up on the fuel reports.

With the reports well on their way Justin then caught a flight to Charleroi Airport, Belgium (CRL) to complete the final audit and back again all in the same day!

Steve also made a visit over the pond to Cincinnati, USA (CVG) at the end of April to complete a Part 145 Line Station audit on behalf of DHL (Air) Ltd. Steve travelled by jump seat on a DHL Courier flight which meant before he travelled we had apply for a full US business visa which worked out to be a three day task in itself but once all documents and interviews were completed Steve sailed through the embassy and now has a 10 year US business Visa!!

Last but not least Steve, Paul and Clive completed a 2 day Fuel & De-icing Auditors course for Monarch down in Luton, UK which was a great success with all attendees receiving their certificates at the end of the course. 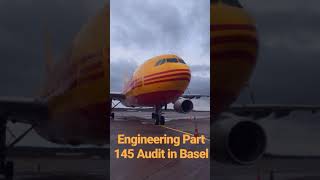